Diagnosing a Slow or Overloaded Network

At some time, you'll likely find yourself noticing that your network seems sluggish. It's not down, but things web pages seem to be taking significantly longer than usual to appear in the browser, downloading files is slow or maybe the ping times to your favorite gaming server seem to have increased for no reason. This section of troubleshooting is to show some tools for use in diagnosing these sorts of problems.

If you are diagnosing a slowdown in your network, the first thing to test is to see if your local LAN is the problem or not. It could just be that the particular web site or game server to which you are connecting is congested. Your Internet connectivity is fine if that is the case, so there may be nothing you can do. On the other hand, there may be something within your LAN that's causing your slowdown. A quick way to check this is by using one of network speed test tools like the ones found at DSLReports.com, Speedtest.net or Speakeasy Speed Test. With the latter two tools, you (usually) choose the server that is closest to your geographic location. With the DSL Reports speed test, it picks a number of servers - both close and far geographically (either you can share your location or it will approximate it based on your IP address). It then runs simultaneous tests to those servers to get a composite picture. My results from the DSL Reports speed test are shown below. 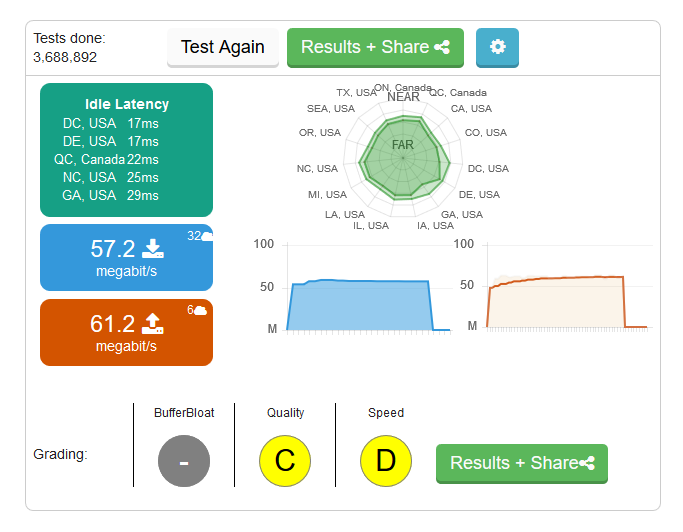 Another use of the network speed test tools is to get a feel for what it will be like to use a gaming server that's geographically far from your home. Suppose you happen to run into a long-lost friend who's also an avid World of Warcraft player. You both decide you should quest together .. and then you find out that unfortunately, your friend now lives on the opposite coast of the U.S. from you. You can try a speed test to city in or near the server they are on in order to see if starting or transferring a character there is even feasible.

I pay for 50/50 Mbps FIOS service and am getting upload and download speeds of 57.2 Mbps and 61.2 Mbps, respectively. This test shows that I'm getting a bit more than what I'm paying for. If I was having trouble connecting to a particular web site or game server but still got results like those above, I would have to conclude that my connection is fine, but there is a problem somewhere between my ISP and that server. One thing I might try in this case is use one of the tests that would let me pick a test server that is geographically nearer to the site I'm trying to reach (assuming I knew that information) and run the test again. If that test shows reasonable speeds, it's probably a problem with the site itself. Don't be surprised, however, if the speed test results when going across the country are significantly lower than those going 20 miles from your home. That's not unusual nor is there anything wrong (most likely).

If you don't see the expected speeds, first check that your test machine is the only one using the Internet connection. One thing you should do (or be prepared to do) is to disconnect all devices from the LAN except the one doing the speed testing. Physically disconnect the cables from the router/switch. This also includes shutting down any wireless connections from cell phones, laptops/netbooks/gaming consoles/TVs/DVRs and the like. (We often forget those are even on the network.) It may be easier to log onto the router and shut off the wireless radio temporarily. Run the speed test again to check that the result is the same.

What if the tests indicate you aren't getting the speeds you expect? (That is, what if you're not getting the speeds you paid for?) Assuming you have picked the nearest server to your location and maybe a few others in the same general area, if none of the sites return test speeds in the vicinity of what you should be getting, the next question is, "Is it them or me?" Is the problem inside your LAN, your portion of your ISP's network or somewhere else? Time to do some more testing.