RAID 1, for those who don't know, uses a pair of disks whereby anything written to one disk is also written (i.e., mirrored) in parallel to the other. I used RAID 1 in desktop builds - both for gaming and business use - for over a decade with very good results. On RAID 1's minus side, half the disk space is lost since, for example, two 500GB drives appear as only one 500GB drive. Also, the writes don't occur completely in parallel and the two drives require synchronization to ensure that everything was faithfully copied to both drives. This slows the write speed of a RAID 1 array down to being a bit slower than writing to a single disk.

If you decided to go with a RAID array, consider purchasing the hard disks from two different sources. (Make sure the model number is the same, however.) Doing so decreases the likelihood of getting two faulty drives from the same "bad" batch.

On the plus side, is that in the event either one of the two disks fails, no data is lost. That's the big plus that saved me from data loss a number of times. Also, when reading files from disk, the RAID 1 array can read alternate blocks of a file from both drives simultaneously to nearly double the read speed. (This is similar to how RAID 0 striping works all the time. See below.) In a gaming system, significantly more time is spent reading from the disks than writing, so RAID 0 gave me a noticeable increase in speed when booting, loading games initially, switching maps/level, etc. When and if a disk fails, that boost in read performance (and the security on having a constant backup) is lost until a replacement is installed and the files are copied from the remaining drive to the new drive. (This is called rebuilding the RAID array, and while this is in progress, it's a very good idea not to use the system. It's going to be really slow anyway, so just give it the necessary time to finish.)

A RAID 1 array can be built as a "hardware" or "software" array. Hardware arrays are those that use a motherboard with a chipset that supports RAID. Most current motherboards, even lower-end ones, support some form of hardware RAID. Sometimes, it's only RAID 0 and 1. (More on RAID 0 in a bit.) Optionally, we can buy a RAID controller add-in card to create a hardware RAID 1 array. The higher-priced add-in cards are often faster than the RAID solutions found on motherboards, so it's a good alternative. Windows 7, Windows 8 and Windows 8.1 also support creating RAID arrays though the operating system software. I personally have not used a software RAID, and it wasn't clear from what I read if a software RAID can be used as the boot drive. I know a hardware RAID array can be the boot drive as that's pretty much the only way I have done it.

The second thing we need is a matched pair of disks. Technically, the disks don't have to be the same, but it's more efficient if they are. If a 1.5 TB drive is paired with a 2 TB drive, the resulting RAID 1 array will be 1.5 TB with the extra 500GB of space on the 2 TB drive wasted. If the two drives have significantly different write times, the effective write time is that of the slower drive (plus the overhead for synchronization). This would waste the potential speed of the (presumably more expensive) faster drive. Typically, I just get a matched pair of drives from the outset. That said, it's a good idea to get each drive from a different source. That way, if the vendor happened to be the unlucky recipient of a bad batch of drives, the system we build with them won't inherit all the same bad luck.

When installing the disks, it is best to leave airspace between the drives if possible. If the drive cage has a fan that moves air across the drives, that's even better. The power and data cables should be kept out of the way as much as possible. The picture below shows a pair of drives with a fan in front of them that draws cool air in from the front of the case. (The case is an Antec Nine Hundred.) 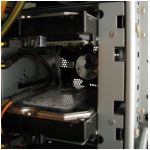 Setting up a hardware RAID array varies by motherboard, but the basics tend to be the same. Rather than write my own instructions here, I'll just point to one of the many references I found on the subject at PCWorld. Really, the main trick for setting up a hardware RAID in Windows is having the correct drivers onhand (on a USB stick, CD or DVD) during the Windows installation process. For an example of setting up a software RAID array, this article at Overclockers seems to be pretty complete. It's not something I have done, myself.

Although RAID 1 has saved my hide on a number of occasions, it's only part of a good backup scheme. For example, RAID 1 won't protect against accidental deletion of (irreplaceable) files. Nor does it protect against viruses. Therefore, it's still a good idea to perform a periodic backup of critical files to CD-Rs, DVD-Rs, an external disk, a spare internal disk, another computer, a network file server or a backup server on the Internet. This need not be a backup of everything on the disk (like RAID 1 does), but it should be those documents, audio files, pictures, and movies that you yourself have created and would not be able to replace. Several of the following sections talk about these alternatives.