There a lot of good things to say about World of Warcraft, but not everything is hugs and kittens. Now, let's first look at what there is for a parent to be apprehensive about in the game.

Like any non-trivial game, World of Warcraft takes time to play. How much time is really up to the player (or the player's parents as the case may be). There is no denying that WoW can become quite a time sink. It takes time to level, gather materials to sell or make into needed items, run instances, complete quests and do research. Some instances are quite short, taking only an hour or two. Others are very long. As an example of the extreme, there was one instance I did with a random group (called a "pick up group" or "PUG" - borrowing the same from basketball) that is usually done in three parts. That is, it's usually run three separate times. This particular group did very well on the first part and decided to run the whole thing in one sitting. I was sitting for a little over six hours. One of the major complaints players had about WoW was how long instances were taking, so in the last expansion, the new instances where constructed such that bosses that could be done in shorter times and individually over several days if necessary.

There are ways parents can control how much their child plays. Starting up WoW requires logging into a WoW account with a user name and password. Younger players don't need to know what that password is to play their characters even if they switch between them, so a parent can logon to WoW and turn it over to their child to continue. If the player logs off or communication drops and the player is logged off automatically by WoW, it can become tedious for the parent to have to go back to the computer and type in the password every time. It would not be a problem in my house as connection problems are rare with my Internet Service Provider, but that not the case for every household.

Another way to control game playing time is to use the parental controls provided by Blizzard for its games. (It used to be just for WoW, but now appears to cover all Blizzard games. A login may be required to see that page.) These are used to set the times that the game may be played by day of the week and hour of the day (in half hour increments). This schedule is given a separate password (and email address) from the account's password so even if your child knows the account password, they can't change the schedule. Unfortunately, this schedule is set for the entire account rather than individual characters, so if the parent would like to play after junior (or juniorette) has gone to bed (and it's outside the scheduled hours), the best approach is a separate account. One reason that the schedule is set on the account - not on the game installed on your computer - is so that junior/juniorette can't just go to a friend's house to "study" and play their character from there. Clever folks those Blizzard programmers. Additionally, the game has a command - /played - that can be typed into the chat text window to get the total number of days, hours and minutes played on that character. (The number of "days" is the number of 24 periods played - most likely not contiguously.) Parents can ask to see these numbers periodically to see if they are increasing unexpectedly. 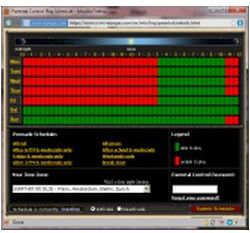 Unfortunately, some quests are just plain tedious and time consuming. I found the newer the quest is (i.e., those that occur in later levels in expansion packs as opposed to the original ones in the original portion of the game), the less likely this was to be the case. Blizzard has reworked a lot of the older quests as well. If a player is trying to get 20 of something from some animal along with 15 other players that just happen to be doing the same quest at the same time, this can take quite a while. Time management comes into play here. If your child complains about a quest taking too long, encourage them to either drop it or come back to it later. WoW does keep track of the rate at which items are being collected in a certain area and dynamically changes the rate at which those items "spawn" (i.e., get created again). Even with this, if an item is being over-farmed at a given time, it may not be enough. There are just so many quests though that (you or) your child should always have others to do instead.

Most parents have probably heard a similar lament from their child when they ask them to quit a game to go to bed, come to dinner or do their homework. In some games, it's a hollow complaint because they can stop and save anywhere without losing any progress or achievements. In World of Warcraft, unfortunately, that is not always the case. It is true that a player can log out of WoW at any time or place. (The game does have a short countdown if a player logs out when they are not in a "safe" area such as a town.) The world in WoW is always live and active even if your child's character isn't playing. If your child just managed to battle their way through a bevy of baddies to advance in a quest, they won't want to stop and log out at that point. If they do, everything they've just managed to defeat will likely be back when they log back in. (This is called "respawning" in WoW.) It's likely that they will re-enter the game standing on or near one of the game's computer-controlled characters (called "NPCs" for Non-Player Characters) who will immediately start attacking (as will any other nearby NPCs). That generally ends badly. No WoW player likes to have to repeat the effort to get back to where they were in the progression of a quest.

That last paragraph only looks at the problem from the standpoint of playing alone. It's worse if your child is with a group in an instance. It can sometimes take a long time to get a group formed, and if the instance is new to the group, it can take a while to make their way through. Nobody likes to have to quit in the middle of an instance, and other players don't appreciate it when another player quits before the end. If it happens often, your child may find it hard to get invited to a party because of their reputation of not seeing it through to the end.

Even with the above caveats, the facts in WoW are: a player can quit anywhere and anytime in the game if they have to. Every player can "hearth" (teleport) directly from any place inside WoW to a safe spot at any time (although there is a time limit to how often they can do that - and a countdown until the limit ends). Before allowing your child to play WoW, set the ground rules for questing and "raiding" in a party or group. Starting a quest with less than a half hour or a raid with less than an hour before their time ends should be discouraged. Along with the parental controls, children will learn how to cope. If they've got only 20 minutes left, they can log out early (Gasp!), gather some extra raw materials for whatever profession they've chosen, browse the auction house or (at the higher levels) do one of the short, repeatable daily quests to get in-game gold. The game does not lend itself to having a player quit at a moment's notice, but it can be managed fairly well.