RAID 0 is the preferred hard disk solution for the fastest disk access possible and is very popular in gaming desktops (and some laptops). With RAID 0, files over a certain size - called the stripe size - are broken into "stripes" and the stripes are written to alternating disks. Generally, the number of hard disks in a RAID 0 array is two, but it can be more. If it is two, the first stripe-sized block of a file is written to one disk and the second is written to the second disk. The third stripe is written to the first disk, and so on. The stripes can be fed to the two disks in parallel nearly doubling both their read and write speed.

The first and major plus as mentioned is the greatly improved read and write speed. Also on the plus side, unlike with RAID 1, no disk space is lost in RAID 0. Two 2 TB drives would appear as a single 4 TB drive. On RAID 0's minus side, if either disk fails, all files over the stripe size are effectively lost since half of a file (assuming a two disk raid) is little better than no file. One way to resolve this problem is to have a third non-RAID disk that matches the size of the RAID 0 array (or larger). This drive will be used to contain one or more backups of the RAID 0 array. Some form of backup software such as Acronis True Image Home 2015 would then be installed and configured to perform backups on a regular - typically nightly - basis.

Acronis True Image has a feature named Acronis Nonstop Backup that automatically creates incremental backups of files and folders (or even partitions) every five minutes allowing users to roll back their system, files, and folders to a point in time in the past. While this sounds good, it may well defeat the purpose of a RAID 0 drive or at least reduce it. There would need to be some sort of synchronization or checking of the backup in real-time that would slow down the RAID array. Since it's incremental, it may not be much in reality. Acronis also has a powerful scheduler to make the backup at some time when you are not on the computer. This would not interfere with the computer while it's in use, but the risk is losing any data created since the last backup is run.

Acronis is not the only backup program to consider. Macrium (Reflect) and Paragon (Hard Disk Manager) are also quite popular. At various times, various releases of one or the other products have had issues. I currently use CrashPlan, which could be used for a backup scheme like the one above, but it really meant for backing up one computer's files to another (which could be a local PC, a friend's PC over the Internet, or even CrashPlan's own servers).

From a build point of view, for hardware RAID, we need a motherboard that supports RAID or we need to buy a RAID controller add-in card as before. For software RAID, we need an operating system that supports that feature (also as for RAID 1). The second thing we need is a matched pair of disks and a third disk that's approximately the size of the RAID array. The disks to be used in the array don't have to be the same, but the array is generally more stable if they are. If a 1 TB drive is paired with a  1.5 TB drive, the resulting RAID 0 array will be twice the size of the 1 TB drive or  2 TB with the 500 GB of extra space on the 1.5 TB drive wasted. If the two drives have significantly different write times, the effective write time is that of the slower drive. This would waste the potential speed of the (presumably more expensive) faster drive.

As for the backup drive, it may either be external or internal. If using an external, try to use USB 3.0 (or above) or an eSATA connection. Disks are installed using the same rules of thumb as with RAID 1. Leave airspace between the drives if possible and use or install fans for the drive cage, if possible. The power and data cables should be kept out of the way if possible. The picture below shows a pair of drives used for RAID 0 and a third, larger drive used for backup. (The case is an Antec Nine Hundred.) 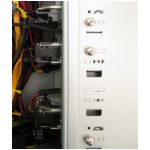 As before, rather than giving instructions for setting up a RAID system here, please refer to the list of guides found on the Internet such as those listed in the first section.