In the RAID 1 (mirroring) discussion, it was mentioned that the write speed of such an array is slightly slower than writing to a single disk. On the other hand, RAID 0 yields a write speed that is nearly double that of a single disk (because it involves writing simultaneously to two disks). What would be ideal is to have the continuous backup that RAID 1 affords while somehow keeping the write speed of a RAID 0 array.

Somewhere along the line, somebody realized that if we had a pair of identical RAID 1 arrays, we could write to those using the striping technique of RAID 0 and let the RAID array perform the mirroring as time permits. This is the essence of the solution provided by RAID 1+0, which is also known as RAID 10. It is almost always written as RAID 10. Essentially a pair of RAID 1 arrays is used in a RAID 0 array, which makes it a stripe of mirrors. This gives us (nearly) the speed of a RAID 0 array with the data redundancy and security of a RAID 1 array. A RAID 10 array requires (a minimum of) four hard disks and like a RAID 1 array, only half the total disk space is accessible. However, the write speed to that array is essentially the same as that of a RAID 0 array. Even better, the read speed is double that of a RAID 0 array. For a gaming system, which tends to do a lot of burst reading (when switching levels or areas for example), this can make quite a difference.

The first and major plus of RAID 10, which was already mentioned, is the combination of the advantages of RAID 0 speed and RAID 1 security. If any single disk fails, no data is lost. The failed disk can be replaced and the RAID rebuilt from the remaining disks. In theory, two drives can fail so long as they do not both contain the same mirrored stripe. In general, we are trying to guard against single disk failure while maintaining RAID 0 (or better) performance.

From a build point of view, we need the motherboard support for RAID 10 or an add-in card that supports RAID 10. This time, however, we need a set of four matched disks. The same caveats about disk size and speed apply as in RAID 0 and RAID 1. One additional factor in the mix is that you need a case that holds four internal hard disks and still has decent airflow. Leave airspace between the drives if possible and use or install fans for the drive cage, if possible. The power and data cables should be kept out of the way. The picture below shows four drives in RAID 10. 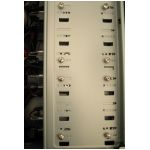 Note that I did not talk about software RAID in the last paragraph. As far as I can tell, Windows 7 does not support RAID 10 directly, so a hardware RAID is the only option. Windows 8 and Windows 8.1 support a newer concept called Storage Spaces. Storage Spaces don't provide an exact equivalent to RAID 10, although they do have support configurations with similar goals. However, that's not something I have used (and a bit beyond the scope I was trying to cover here).

Also, note that I only discussed RAID 10 and not RAID 01 (also known as RAID 0+1). While RAID 10 is known as a stripe of mirrors, RAID 01 is known as a mirror of stripes. Most motherboards only support RAID 10 and not RAID 01. RAID 10 and RAID 01 require the same resources and yield the same performance benefits. The devil in the details is more involved than I want to get into here, but suffice it to say that RAID 10 is inherently more stable than RAID 01 when a drive failure occurs. A good article on why this is so can be found at The Geek Stuff.

As before, rather than giving instructions for setting up a RAID system here, please refer to the list of guides found on the Internet such as those listed in the first section.