Before purchasing networking equipment, you need a plan as to how the network will be run through your house. If everything to be networked is in one room, you may only need a very simple sketch. Such a sketch can still be very worthwhile. For example, it may make you realize that even though two of the computers are only seven feet apart physically, that doorway between them means that you'll need to run the cable to opposite way around the edge of the room, and therefore, you need a 25 foot cable for the job. If your network is going to be more complex - for example, you have some devices in a home office, one or two in bedrooms, and yet another in the den - you might want to get a copy of or draw a floor plan that is reasonably to scale and pencil in your network on that. The physical portion of running a wired network consists of running cables from the various devices to one or more central locations where the cables will be connected together. If there are walls (floors, ceilings) and long distances involved, you'll need to plan more carefully so that you can buy or make cables of the proper length. If a cable would be particularly difficult to run, using wireless networking for part of the network may make sense. In this section, we'll look at a few typical layouts in order to show the types of decisions you may have to make.

In order to discuss the physical layout, we need to know a couple terms that will be discussed in greater detail in the next couple chapters. Here, we need only a brief introduction so that the discussion makes sense. Once you have read the following sections discussing the equipment needed for networks, you may find yourself needing to revisit this section for this all to be clear. The first terms are "router," "switch" and even "router/switch." For this discussion, all of these terms refer to a family of devices that allow network cables coming from devices like PCs and Xboxes to be connected together. Think of it as a fancy version of the 2-to-1 phone jack splitter that allows you to connect a phone and fax answering machine to the same phone jack. In the case of a switch, however, we may be connecting four, five, eight or more network cables together. (Also, I often use the term "device" or "network device" rather than just saying computer, because we are increasingly hooking up things like DVRs, streaming media boxes like a Roku, Xboxes and Playstations, which aren't computers, but do use network connections.) I also refer to a "Wireless Access Point" in one example, which is a device that allows wireless network connections between devices using radio signals rather than physical cables. Again, these will be discussed in greater detail in the following pages.

Example 1: DSL modem in home office and all devices are in the same room. 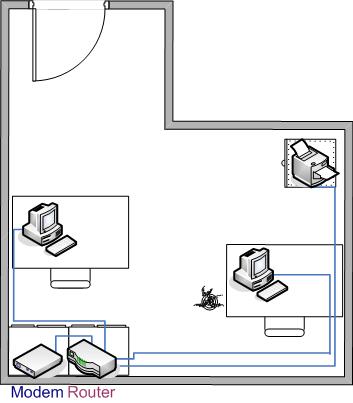 This example happens to be how many home networks get started. In it, you have a new computer and an older computer (or two) that you would like to network in order to share files and the printer. I show the printer as being network capable in this example, but oftern the printer is connected to one of the computers and shared that way instead.

Additionally, maybe you've got some form of internet connection (cable or DSL) that you would like to share. (If that is not the case, the difference is that you would not have a modem and the router could be replaced with a simple switch, but we are getting ahead of ourselves.) Note that the "modem" referred to is a high-speed Internet modem (generally supplied by your a cable or DSL provider), not the traditional telephone modem found in computers.

For this example, setting up the network is pretty simple. Cables are run around the edge of the room from each device to a common point where the router/switch is to be located. It's a good idea to use staples or some other means to semi-permanently affix the cable to a baseboard or the like. The cables are concentrated to the one spot where a router or switch will be used to connect them all. Sounds pretty simple, and it is.

Example 2: Cable modem in living room, most of the devices in the home office, one in the kids' room.

In this example, the scenario is that you have signed up for high-speed digital cable service. Your cable company's installer arrives and starts to put your cable modem right next to your TV. You explain that you really need the cable modem in your home office where your computer is, but your installer insists he can only install the cable modem within 6 ft of your TV cable box or he must charge you an additional exorbitant amount per linear foot. You decide to keep the money in your pension plan and run a single longer cable from the cable modem to a combination router/switch in your home office. You can then branch off to the other networked devices from there. The advantage is there is only one long cable run to make. 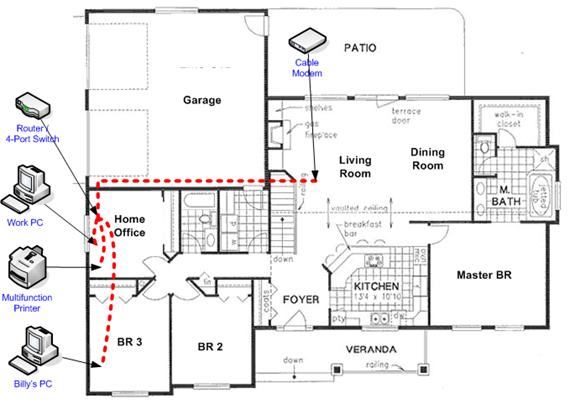 Once you have run the Ethernet cable from the cable modem to the home office, connecting the devices is more or less the same as in example 1. However, the difference in this example is that you also want to run a cable to "Billy's PC" in the adjacent room. There are several ways to do this. You can run a cable through the wall into the attic and then drop it down the wall into Billy's room. You can drill a hole directly into the adjacent room (the closet in Billy's room in this case) and shove the cable - connector and all - into the next room (and then patch as necessary). You can also cut two slightly offset rectangles into the drywall and install drop-in network boxes on either side. (You would connect the two boxes together with a short cable hidden in the wall. Then you connect the PC on one side and the router on the other side to their respective drop-in box you just installed in the wall. It all depends on how clean of a job you want and how much time you're willing to put into it.