Example 3: DSL modem in home office, majority of the devices in the home office, one computer in each kid's room, spare computer, multimedia PC in the living room and Xbox in the den.

This is my everything-plus-the-kitchen-sink example. Still, it comes up quite commonly, especially in houses and townhouses where the devices to be connected are on more than one story. The network starts with a DSL modem in the home office on the second floor. In that room, a PC and printer are networked. On the same floor, there are computers in each of the kids' rooms and one to the "old" PC in the spare bedroom. Also, in different rooms downstairs are an Xbox 360 and a multimedia (home theater) PC we'd like to have connected. 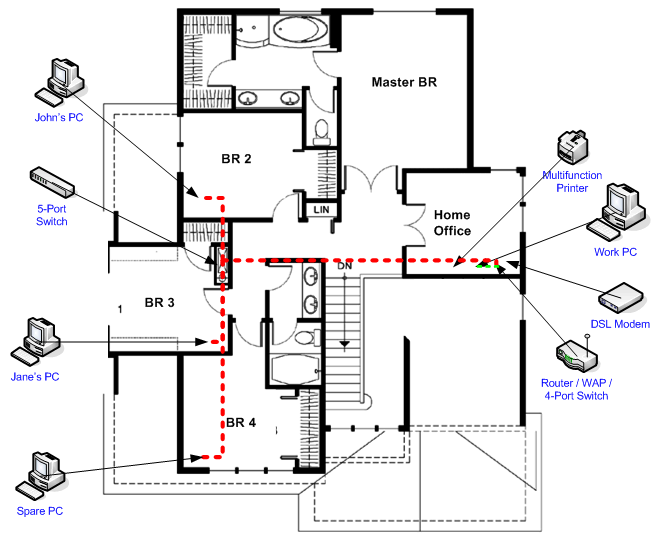 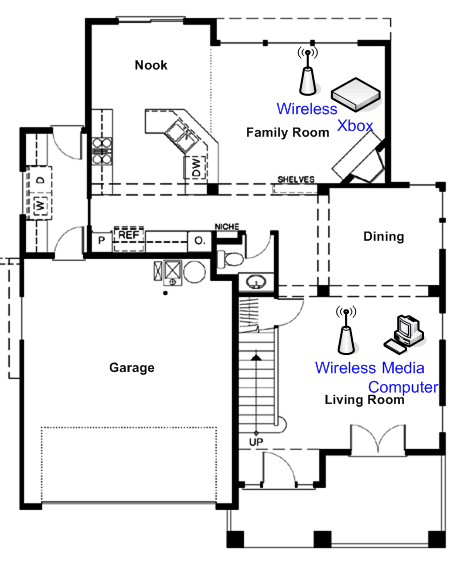 The physical network tentatively penned in for this network is to put the router/switch in the home office and connect up the devices there. However, rather than run three long cables to each of the bedrooms, run one long cable through the attic and drop it down into a utility closet near the bedrooms. In that closet, place a 5-port switch (a switch capable accepting up to five Ethernet cables) and connect the cable from the home office to the switch. Then, we run three shorter cables from the switch, through the attic and drop them down into each of the bedrooms. We could also put nice drop-in network boxes in the walls of each of the bedrooms and run a short cable from the wall boxes to the respective computers. The top floor is now taken care of. In a larger house or a small office, you may have networked devices in three or four clustered areas. It may make sense to put a switch in all of those areas if the cable runs from one area to another are long. That also allows for easy future expansion.

The router I'm proposing for this example also contains a wireless access point (WAP), which is capable of letting devices connect wirelessly to the home network. Many ISPs will provide a router with a WAP built-in. I use this in my example because while running cables in the attic is certainly some work, running them through adjacent floors can be much more difficult or nearly impossible. Instead, the two devices downstairs will be connected wirelessly.

Here's sort of the synopsis of what we looked at above. How many switches & cables you'll need and where to physically place them is one question you'll have to answer in your planning. If most of the devices to be connected to the network are in one area of the house, that's a logical place for the switch. If there are only one or two other devices to be connected, long cables to them will finish the job, but a good goal is to minimize the number of long cable runs.

Another variation is that the network needs to run from where the Cable or DSL modem is (e.g. living room) to a different part of the house (e.g., the home office on the other end) where most or all of the networked devices reside. In that case, you may want to make a single longer cable run from the modem to the router. Then, from that router, you can run shorter cables to separate devices near that end of the house. The advantage is that you run only one long cable from the router to the modem and then shorter cables from the switch to the devices presumably nearby instead of several separate, long cables from the router to each device.

For particularly long runs on different sides of the house, using multiple switches and running one cable from one router/switch to the other switch is a good solution. Then from the nearby switches, run the final shorter cables to the nearby devices. Lastly, if running a cable is difficult, wireless networking may be a good alternative. With these examples in mind, we need to finalize a specific set of equipment needed based on the type of network we are installing. This is the topic of the section, The Local Area Network. If part of your network is going to include wireless networking, there are a few more things to consider, which is the topic of the next section. If the router supplied by your ISP includes wireless networking, but you don't plan to use it, you should also read the next section topic on disabling your wireless network capability. (By default, it is usually on.)